Stand with Ukraine. Save peace in the world!

The National Bank of Ukraine has opened a special fundraising account for donations from international organizations, donors, and people who take care of our common peaceful future.

The world celebrates the 20th anniversary of .NET on February 14. Join the party on Twitter by sharing your favorite .NET moments: Tweet #dotNETLovesMe


Join us for a live broadcast with Scott Hanselman, Scott Hunter, the .NET team, and special guests to celebrate the 20th anniversary of the .NET development platform. Share your stories on Twitter #dotNETLovesMe and you might end up on the broadcast!

Microsoft unveils the vision and road map for its next generation of software and services, the Microsoft .NET platform.

Microsoft releases the source code for ASP.NET MVC under MS-PL license. By 2012, it is relicensed under Apache 2.0 and becomes one of the first major open-source projects at Microsoft.

The .NET Compiler Platform (Roslyn) is released as open source at Build in April and the .NET Foundation is founded. In November, the .NET Core project -a cross-platform, high-performance implementation- begins on GitHub.

.NET Core 1.0 releases at Red Hat DevNation, showing how serious Microsoft is about embracing Linux and demonstrating its commitment to open source.

The latest release becomes the fastest adopted version of .NET ever, with over 7,000 contributors outside Microsoft making more than 21,000 contributions. It includes C# 10, F# 5, and many new features to simplify code, iterate faster, and perform better.

The world celebrates the 20th anniversary of .NET on February 14. 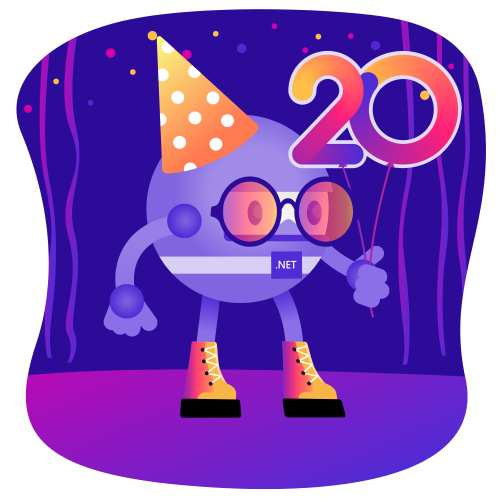 Coding is better with friends, especially when they bring their own mods. As the mascot for the .NET community, dotnet-bot helps with checking pull requests on .NET repos on GitHub.